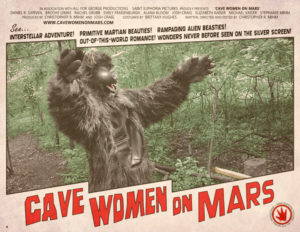 This is a scene from the movie Cave Women on Mars. (5 minutes)

This is the trailer for Cave Women on Mars. (2 minutes)

When brave explorers Lieutenant Elliott and Captain Jackson travel via rocket ship from Earth to Mars, they don't expect to find intelligent life. They are surprised to find that Mars is occupied by two primitive warrior tribes dominated by women. It is truly an eye-opening adventure for Lieutenant Elliott, a mere male, as he gets caught up in the clash between the tribes.

Buy from the Filmmaker

This site uses Akismet to reduce spam. Learn how your comment data is processed.